Catherine is a demented puzzle game from Atlus, where the main character, Vincent, cheats on his girlfriend, Katherine, of five years with another woman, Catherine. The act causes Vincent, upon sleeping, to enter into a nightmare where he, along with other cheaters, has to climb his way out to survive. When he’s not sleeping,  he goes to the bar to hang out with friends, drink, play an arcade game, and talk to strangers. It is during these situations that you choose his responses, changing your morals to good or evil, and ultimately choosing which woman you will be with.

I loved this game! It was a difficult puzzle game, making me want to throw my controller at the wall, but I stuck through it and it ended up being worth every cent I paid for it. I would have rather had Vincent man up and take responsibility for his actions, but I guess there wouldn’t be a game if that were the case. It was like watching an anime, making moral choices, and playing a puzzle game all in one. The game itself doesn’t change whether you are good or evil, but the dialog definitely does. I would definitely play this game again, just to see all of the eight different endings.

Even the aesthetics were fantastic. I enjoyed the anime-style graphics and thought the gameplay was both fun and challenging. Not to mention, the music was extremely well done.  However, what completely blew the game away is the storyline. I didn’t think I would find it as compelling as I did. The conversations Vincent has with his best friends are the same conversations I have had with my own friends, making it relateable as well as original and one of a kind. Get it as soon as you can, you won’t be disappointed.

Catherine “Love Is Over” Deluxe Edition 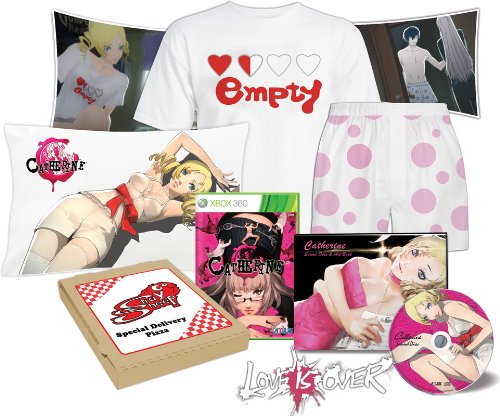